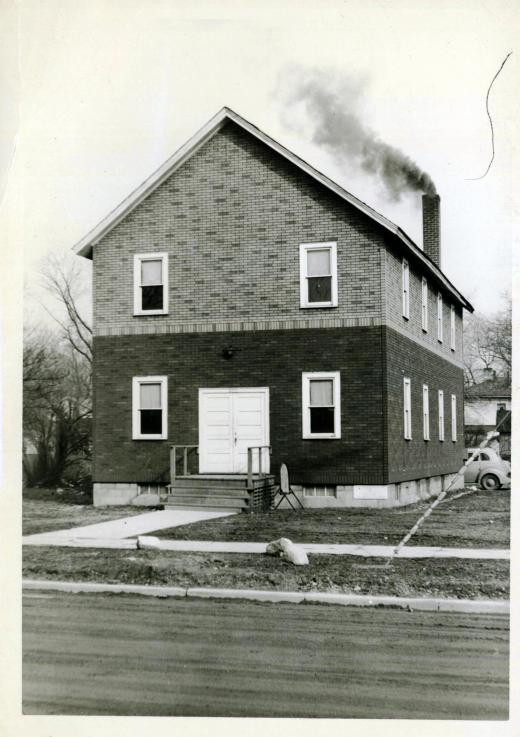 The corner of Buffalo and South Adams holds three significant buildings; the First Ward School, the African Methodist Episcopal Church, and the Good Samaritan Hall. The current hall was originally built in 1893 by The Order of the Good Samaritans and Daughters of Samaria and replaced an earlier meeting-house at the same site that was destroyed in the devestating tornado that destroyed much of downtown Ypsilanti in April, 1893. 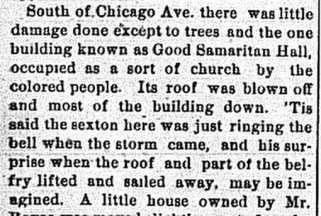 The Samaritans were a benevolent society organized in lodges throughout the country. 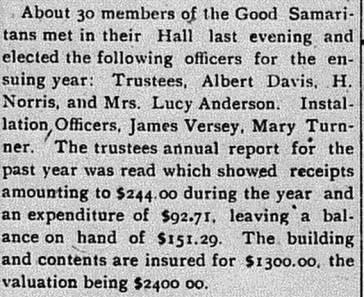 The Samaritans in Ypsilanti were organized as the Love and Union Lodge, which held many of the social events of Ypsilanti’s black community as well as lending the hall out for all manner of civic, social, religious and neighborhood activities. It is hard is hard to imagine a member of the community not coming to the hall at some point during the year around the turn of the last century. It was for many years the center of social life for Ypsilanti African Americans and, now owned by the St. Andrews Lodge of the Prince Hall Masons, continues to hold events.

The former Good Samaritan Hall in 2013.

Below an article mentions David York, an officer of the Order and a resident of South Adams Street in reporting on an 1892 concert held at the hall. 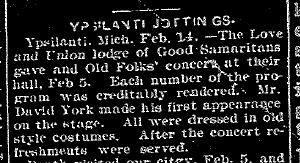 When the current hall was built it originally faced onto Buffalo Street. It was moved in 1945 to conform to Masonic dictates that lodges be aligned east/west.

Good Samaritan Hall when it faced on to Buffalo before 1945. Ypsilanti Historical Society.

In 1926 the fraternal masonic order, St. Andrews Lodge #7 of Prince Hall Freemasons (then known as the Hart Lodge #10), bought the hall that they had been meeting at since 1895.

Notice of early Masonic meetings in the hall.

As of 2013, the St. Andrews Lodge continues to meet in the hall. A Regional Grand Master of the Michigan Prince Hall Masons was William Isaac Burdine, who lead the First Ward School and much of Ypsilanti civic life, from shortly after school opened until his departure for Indiana in 1877.

The website of the St. Andrew’s Lodge has more information on their history.

The March 26, 1897 Ann Arbor Argus had a brief story, below, about the Hart Lodge burying one of their members, Civil War veteran Jeremiah Snively along with his comrade Jeremiah Patton.

Two colored citizens of Ypsilanti, both of whom were soldiers in the late war, and both named Jeremiah, died within half an hour of each other Thursday of last week. They were Jeremiah Snively, who died of pneumonia, and Jeremiah Patton, who succumbed to a stroke of paralysis. The funeral services of the two old veterans were held simultaneously on Sunday afternoon at the A. M. E. church, Ypsilanti, and were Conducted by the ministers of both the A. M. E. and Baptist Churches in that city and Ann Arbor. The G. A. R. turned out in a body and the colored Masons attended in honor of their deceased brother, Jeremiah Snively. The coffins were placed beside each other and it took the crowd 15 minutes to pass by and view the remains. The procession to the cemetery reached farther than from River St. to Huron St., Ypsilanti.

The article below shows just one of the many activities at the hall, perhaps the most mentioned place in the Plaindealer’s Ypsilanti columns. The Washtenaw County Protective League was an affiliate of the short-lived Afro American Protective League. The League, founded at the Detroit convention mentioned below, was an early civil rights and black welfare organization and a forerunner to the NAACP. It sought to redress discrimination in schooling, Jim Crow and lynch law. It also aided blacks feeling from white mob violence, then regular in the south and parts of the north. The convention, according to The Negro’s progress in fifty years, published in 1913, had 141 delegates from 21 states, at least six of them from Ypsilanti.